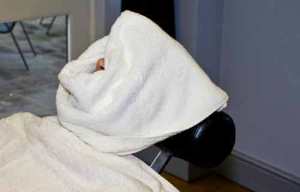 Anyway, today I had my first hot towel shave – you know, that dubious homo-erotic tradition, masquerading as male grooming (not the grisly concept of befriending young boys) in a world where most of the pampering belongs to the women.

It’s a strange institution: a relic of a more innocent time. It comes from an era when a man spending an hour in the bathroom was exclusively down to last night’s curry, and not because he is moisturising, exfoliating, flossing, brushing, spraying, smoothing, and applying both pre-shave and after-shave lotions.

People say the hot towel shave is one of those things you have to experience once in your life. You know, like it’s a rite of passage or something. Well – although I certainly have more pressing concerns than the three millimetres of facial hair I occasionally sport – I’m a sucker for anything that increases my testosterone levels, so I thought I’d give it a try.

It was quite humbling to sit there while another man – whom I had only met three minutes earlier – held a blade to my throat, smiling (and occasionally whistling) while he did so. Thankfully he didn’t make the obvious gag of telling me that this was his first time; nor did he pretend to suffer from a nervous tic or muscular deficiency, which forced his bladed hand to spasm in a mildly comic fashion across my jugular – both of which I had half-expected upon making the appointment.

After the shave, he gave me a seated massage (I was, not him); rubbed my face until I thought he was going to remove the top layer of my skin; cracked my back (and what sounded like a rib); then held my hand in what I thought was a street-style handshake variation I had not seen, but was more likely some kind of reflexology thing. After all that, I momentarily thought I was going to be offered a happy ending as well, but fortunately things didn’t go that far.

I’m not sure it’s something I would do again. There’s only so long I can feel comfortable with a man touching my face, before I start to ponder the softness of his touch, and how precisely manicured his nails are; and I’m not entirely convinced I am more of a man for having put my life in those (admittedly, rather tender) Turkish hands, but it was certainly an experience I won’t forget anytime soon.

Now, if you don’t mind I’m going to shelve the masculinity for forty-three minutes: Glee is about to start…

I am a Scotland based Australian with over 100 publications - humour (Defenestration) to horror (Murky Depths), mystery (FMAM) to mainstream (Underground Voices), and everything in between. My work also appears in several paperback anthologies, including Read by Dawn (Volume 1, 2, 3), The One That Got Away, and Damnation & Dames.
My Tweets
Loading Comments...
Comment
×
<span>%d</span> bloggers like this: