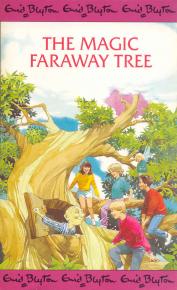 The version I own today.

I’ve read a lot of stories in my life – certainly more than most my age – and the fascination with words started when I was very young.

I was probably about nine or ten when I read The Magic Faraway Tree, originally published in 1943. I didn’t know it at the time but this novel is the second part of a quadrilogy, and I never got around to reading the other three, but fortunately it works as a standalone novel as well. I read and enjoyed other stories by Enid Blyton when I was a child – some of the Famous Five and Secret Seven mysteries – but The Magic Faraway Tree was the only story of hers that really captivated me.

The version I read as a child.

Each day, during the school holidays, sistersBessie and Fanny, along with their brother Jo and cousin Dick (yes, those were their names) would climb to the top of the titular tree, where they would join the residents, including Saucepan Man and Moon Face. Each day the tree would play host to a differently themed Land. The Land of Dreams. The Land of Do-As-You-Please. The Land of Topsy-Turvy. That kind of thing. Which kid wouldn’t want a tree like that in their back garden?

I don’t remember much about the ebb and flow of the plot, and I recall even less about the actual narrative details – only that it was adventure-fantasy at its purest – but the essence of the novel has stuck with me for over thirty years, and that probably says more than any multi-page review could. I’ve still got this book sitting at home, and I was going to go back and read it again for this little tribute, but I decided against it. I don’t want to spoil the memory I have of this one.