“Say your prayers.” Roger’s ex-wife gets a makeover.

Horror and comedy are polar opposites, and although a lot of movies have tried to marry the two genres, only a select few have managed to create something worthwhile.

House was released in 1986 and was the first in a disjointed quadrilogy of films. The series was somewhat unique in that there was no uniformity or overarching tone. But don’t bother with the others, and don’t let the generic title fool you – do yourself a favour and just watch this one. 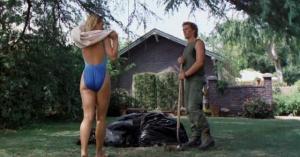 The special effects may be cheap and rubbery, but that’s because the movie never takes itself too seriously, and that’s okay. Horror doesn’t have to be realistic evicerations and computer-assisted effects that are indistinguishable from real life. Sometimes it’s all right for horror to just be a little bit of mindless fun.

The premise is simple. After his aunt commits suicide, divorced horror author Roger Cobb moves in to the house where his young son disappeared. Struggling to come to terms with that as he writes his next book about his experience in the Vietnam War, things start to go bump in the night.

Harold: Hey, it’s great to have a new neighbor. Woman lived here before you was nuts. Biggest bitch under the sun. Just a senile old hag really. Wouldn’t be surprised if someone just got fed up and offed her. Know what I mean?
Roger: She was my aunt.
Harold: Heart of gold though. Just uh, a saint really. And uh such a beautiful woman, for her age.

House is an underappreciated movie that has never been given the love it deserves, and you’ll probably have to speak to a lot of people before you find someone else who has seen it, but give this low budget gem a chance – I think you’ll be pleasantly surprised.