When I still lived at home in my early twenties, I changed the outgoing message on our answerphone to the infamous orgasm scene from this movie – you know, this one…

All these years later I still find it funny, even though my mum doesn’t seem to share the joke, especially as her mother had called from Australia one day and swiftly hung up because she thought she was… well, interrupting something. 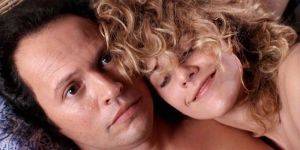 The morning after the night before…

But this movie is more than just a trailer for Meg Ryan’s two minute fake-out. If I’m asked to name my favourite romantic comedy, this is invariably the movie I offer up. It’s a genre traditionally aimed at females and is often loaded with sentimentality and somewhat safe humour.

While it’s fair to say that rom-coms have somewhat saturated the market in recent years, When Harry Met Sally… still feels fresh nearly thirty years on. Released in 1989, the movie manages to swerve the syrup and (for the most part) avoid the potholes of the genre.

Harry: Had my dream again where I’m making love, and the Olympic judges are watching. I’d nailed the compulsories, so this is it, the finals. I got a 9.8 from the Canadians, a perfect 10 from the Americans, and my mother, disguised as an East German judge, gave me a 5.6. Must have been the dismount.

Sure, everyone lives happily ever after by the time the credits roll, but the journey to get there feels real and earned, thanks to its biting and pointed social commentary – usually pitched perfectly by Billy Crystal.