All right, this may be an an obscure one. I’ve never been able to discuss this movie with anyone outside my own family because nobody else seems to have seen it. 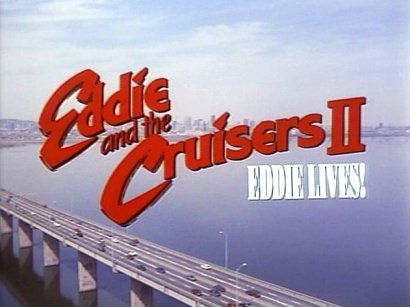 My dad was a singer – in much the same way that I’m a writer – and he loved this movie along with the prequel. The first one from 1983 is good, but the sequel, released six years later, speaks to me a little more. Neither are critical darlings, but both are cult favourites.

The arching narrative of the two films tells the story of legendary musician Eddie Wilson, who fakes his death in a car crash once his band makes it big in the sixties. Nobody sees or hears of him for twenty years, until he is discovered rekindling his love for the music in a seedy Canadian bar.

Rick: You said, “Play more intense!”
Eddie: Louder ain’t more intense.
Rick: Then what is? What is more intense?
Eddie: I was in the desert once, out in the middle of nowhere, absolutely nowhere. Just me, the sand and silence. But if you know what to listen for, it ain’t silent out there. I heard a music out there I never heard before. In the silence. That’s what I’m after, kid. That’s intense. You dig down deep and touch something like that, people are gonna listen. They’ll listen to you because you got something to say! Not just something to show. You understand?
Rick: Yeah, I think I know what you’re talking about.

The performances are not great, and there are elements of it that expose it as a low budget excursion, but Michael Pare is perfect in the central role, bringing an intensity and grit to his character that succeeds in elevating everyone else around him.

The soundtrack for both movies is performed by John Cafferty & the Beaver Brown Band, and it is fantastic. Video footage even exists of me and my sister in the late nineties lip-synching to this song – complete with me pretending to rock out on my electric guitar, and my sister playing a broom-saxophone.

I am a Scotland based Australian with over 100 publications - humour (Defenestration) to horror (Murky Depths), mystery (FMAM) to mainstream (Underground Voices), and everything in between. My work also appears in several paperback anthologies, including Read by Dawn (Volume 1, 2, 3), The One That Got Away, and Damnation & Dames.
My Tweets
Loading Comments...
Comment
×
<span>%d</span> bloggers like this: