It’s no secret: I’m a big fan of the First Blood/Rambo series. But I’m the first one to admit that this is undeniably the most confusingly named collection of movies in cinema. These are the official titles for the four films, in the order they were produced and intended to be viewed: 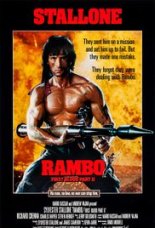 So… First Blood is the first film, released in 1982. So far, so good. It is the only entry in the series with a legitimate title.

The first sequel to First Blood was released in 1985 and is called Rambo: First Blood Part II. The series now has the prefix of Rambo attached to it, which is really where all the problems begin. It’s also slightly concerning that the second movie has the suffix of First Blood Part II, instead of Second Blood, which although lacking in resonance, would have been – at the very least – grammatically cleaner.

In 1988 the third film in the franchise is released, and it is simply called Rambo III, which on the surface is entirely acceptable as it is indeed the third film, but completely maddening as there was never (and has never been) a Rambo II. As its predecessor was Rambo: First Blood Part II, the convention would be for the third film to be called, Rambo II: First Blood Part III, but that is a little clumsy, so I can understand dropping the suffix. You could however, drop the prefix instead, and simply call the third entry, First Blood Part III, which is correct by the series’ logic thus far, but as the decision seems to have been to drop the association with First Blood entirely, the only correct chronological way to present the title is as Rambo II, but as you can see, that title is entirely absent from the series.

The fourth and final film in the series from 2008 – the one that follows Rambo III – is called Rambo. And no, it takes place twenty years after Rambo III, so it’s not a prequel (which would perhaps somewhat justify the title), nor is it a remake or a reboot of the second film in the series (which shares a similar name). It is effectively Rambo IV.

Stallone has gone on record as saying he will not be making another entry in the series, but if he did, there’s a fair chance the fifth film would be called Rambo II.