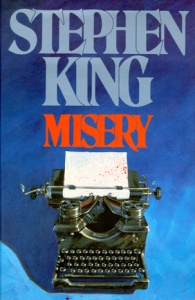 The cover that stole my attention in 1991.

I have read dozens of King novels over the years, but Misery was the first one to catch my attention, when I was fifteen. The popular Hollywood interpretation with Kathy Bates’ Oscar winning lead performance had been released the year before, so the story was still quite fresh at the time, and that was probably the catalyst that took me to the library.

Misery is one of King’s most well-respected stories, and for good reason.  It’s claustrophobic, atmospheric writing at its finest, and a very simple idea, told extremely well. Paul Sheldon is a best-selling romance author who crashes his car in a snowstorm, only to be rescued by his self-proclaimed ‘number one fan’ – the soon to be revealed – psychotic Annie Wilkes. She dislikes that Paul has killed off Misery Chastain in his latest entry to her favourite series of novels, and forces him to write an entirely new story – eradicating what she has just read – for her eyes only.

The infamous hobbling scene from the movie, where Annie breaks both his ankles with a sledgehammer, plays out a little differently in the text… where she chops off one of his feet with an axe instead. It’s more violent, bloody and immediately visceral – not that one way is better, or would be more pleasant. I guess it’s like choosing between the Devil and the deep blue sea.

The book was so good that I went on to read another eighteen King novels in a row before I even so much as looked at another author. My writing style in my young adult years was certainly influenced  – and probably hindered to an extent – by my desire to read so much of his stuff, and I sometimes wonder how things would have changed had I decided to vary my reading habits at such an impressionable age.

Many years later, and Misery still ranks very highly in his oeuvre, and if you wanted to make a case for it being the best thing he’s done, I wouldn’t put up much of an argument.