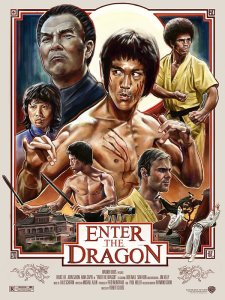 Bruce Lee was a cinematic superhero – truly larger than life, which is ironic as he stood 5 foot 8 inches and weighed a mere 140 pounds. He only starred in four movies* before his premature death at the age of thirty-two, but he left behind a legacy that is as great today as it ever was. He is often referred to as the father of mixed martial arts, because what he was doing then – when nobody else was – is big business now.

My dad performed taekwondo to a very high standard for several years, and his fingerprints are all over the genesis of my enjoyment of Bruce Lee… although I never saw my dad bust out the nunchuks the way Lee does in Enter the Dragon. 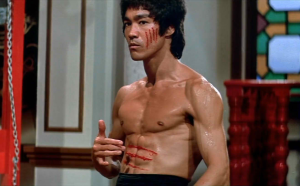 The biggest problem with this movie (in fact, all of Lee’s movies) is that he never seems in any real danger of getting his ass kicked. Even if you suspend your disbelief, it’s hard to forget that he is far and away the best fighter on screen, and you know that the bad guy is going to need more than #spoiler# to take him down.

Lee died six days before the movie was released to the world, so he never saw it become the seminal piece that it is considered today. Enter the Dragon certainly benefits from its Hollywood production, and although in many ways his earlier Hong Kong movies are more brutal and graphic, as a total package it’s hard to deny Lee’s masterwork its place in history.

*Yes, for you aficionados out there, I said four movies. The abomination that is Game of Death doesn’t count… and you guys will know why.