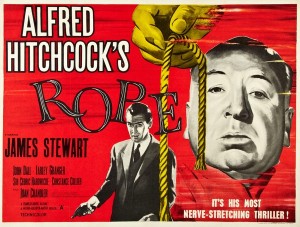 James Stewart is one of my favourite classic Hollywood actors, and this was the first of his four Hitchcock collaborations. They’re all very good, and I know I’m in the minority here, but Rope is arguably their best work together… despite the fact that apparently Stewart didn’t like it.

It’s a rather progressive subject matter for the time of its release, but it was loosely based on an actual crime that took place over two decades earlier, so perhaps that is the most jarring thing about it. 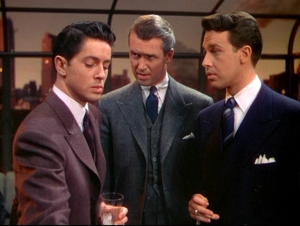 It’s a game of cat and mouse.

Students Brandon and Phillip decide to kill one of their classmates in order to see if they can pull off the perfect murder, only to have their crime brought under the microscope by their mentor Rupert. What follows is a back and forth, with Brandon enjoying the post-mortem glow and Phillip emotionally unravelling beside him, while Rupert tries to piece the whole thing together.

Hitchcock used an innovative one-camera technique which helps to give the whole thing a very intimate and claustrophobic feel, as if you’re a literal fly on the wall in the aftermath of this experimental murder. Audiences nowadays are comfortable with longer attractions, so modern cinema often throws up (a term which is apropos here) snoozefests that run over three hours, however Rope is presented as a real time affair and clocks in at a refreshingly lean eighty minutes. The entire movie also takes place in one static apartment location, so action junkies need not apply as there is no visual excitement to distract you from the limited number of characters on screen.

Although Rope is extremely underrated, and you won’t see it appearing on many ‘best of’ Hitchcock lists, it is an exercise in how to build a great plot with interesting characters and thought-provoking dialogue.