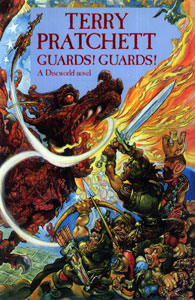 I was introduced to the world of Terry Pratchett by a friend many years ago, who was a big fan of his. He is primarily known for his loosely connected Discworld series of novels, which reached over forty entries before his death in 2015. Guards! Guards! is the eighth ‘chapter’, but it works as a standalone novel as well.

For whatever reason comedy novels don’t appeal to me very much, and the handful of Pratchett books that I read in the nineties – of which Guards! Guards! is the best – is my only foray into the genre. I’ve also never greatly enjoyed fantasy stuff, and the Discworld series is often considered a parody of The Lord of the Rings… a novel I didn’t enjoy either. Now that I think about it, I’m not sure why I bothered!

The biggest gripe I have with the novel – and by extension all the other Pratchett stories I read – is just how similar they feel. Sure, they made me laugh like all comedy should, and in the case of Guards! Guards! there were moments that were very funny indeed, but the style of humour is ultimately very limited. It sticks to a tried and tested template and that’s fine, but when a lot of jokes follow a similar format, and one character often feels much like the next, it becomes difficult to differentiate. I wouldn’t go so far as to say once you’ve read one Discworld novel you’ve read them all, but that’s certainly a criticism I can understand.

Having said that, Pratchett’s Discworld trope of using footnotes throughout each of the novels in the series surprisingly never wears out its welcome.