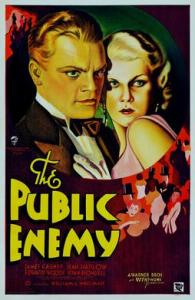 The Public Enemy is almost ninety years old, so everyone that you see on screen has now passed on. It’s an unimportant observation, but something that always gives me pause when I’m watching a movie from this era.

It was produced in that five year window during the early thirties when ‘talkies’ were a new thing, so motion picture regulations were not being enforced as they would be thereafter. Consequently there are some suggestive scenes and dark moments here that may have been lost to the cutting room floor had the piece been made at another time.

James Cagney was always a fantastic gangster on screen; in my opinion, the best there ever was. He was a much better actor than most, and the problem that saddles him with is that he gives the best performance in The Public Enemy by quite some margin. Everyone else looks like a drama student by comparison. Some of that is down to how uncomfortable actors may have been with the new technology, but Cagney takes to it like the proverbial duck.

The Public Enemy was Cagney’s first foray into the genre that would make him famous. It’s difficult to take seriously for a first time viewing in 2017, because the world has moved on so much since, but if you can set aside your modern bias you’ll find that this simplistic tale of trying to X your spot in a tough world that is pushing back against you, is a stellar movie… with a powerful and memorable final scene.