I’m experiencing a little literary law of diminishing returns: the more I put into the novel, the harder it is to squeeze out a result. But it’s fine, I’m enjoying the difficulties, and that’s half the battle. I have arrived at this late stage of the game before and walked away, but the fact that I have no intention of doing that this time is a very good sign. 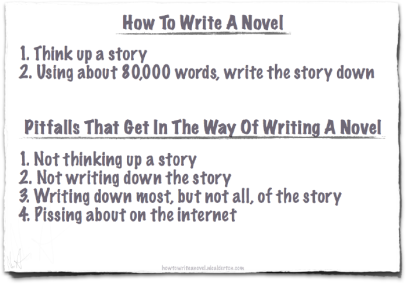 I have over 78,000 words in the bag, and am currently putting the finishing touches to Chapter 27, which – after some organisational changes in the way I want the story to play out – is now the penultimate chapter of Slipwater. I’m not cutting any of the content, I just think it works better as two chapters instead of the original idea of four.

I’m happy that I know what happens in Chapter 28, so all I have to do now is write it. I’m also fairly certain of the length of that final chapter, so my total word count for this draft should be approximately 84,000 words, give or take. At this rate it will definitely be done in the next ten days, or the next five if my speed dealer’s new stash has arrived.

So that finish line is in sight, or at least… the marker for the end of the first lap. And now that I’m so close, I guess the best question to ask myself is – why the hell has it taken me this long to get around to finishing it?