The Bourne Identity by Robert Ludlum – 1980 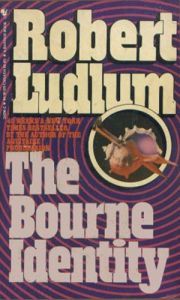 I had expected my experience with The Bourne Identity would somewhat follow my experience with Jaws – where I had seen the movie first and was then pleasantly surprised at how good the novel was – but that is not what happened here at all. Unfortunately my first dance with spy fiction supremo, Robert Ludlum was not a particularly memorable one.

It took me a long time to finish The Bourne Identity, and that’s never a good sign. Where the movie is exciting and energetic, the book is mundane and plodding; and while the movie has a frenetic pace, the book wastes no time getting bogged down with the minutiae of Jason Bourne’s amnesia. Yes, this could be deemed as clever detail and important character background, but for the majority of the text it doesn’t even seem like these are the same protagonists.

But it’s more than likely my fault for comparing the two mediums anyway. Had the movie not come along, maybe I would have enjoyed the book more. But we’ll never know the answer to that, which is a shame. One thing I’m sure about: The Bourne Identity was such a rigid reading experience that it has put me off reading the two sequels that complete the trilogy – and I had bought them all specifically so that I could read them back to back.

Hollywood – I blame you.