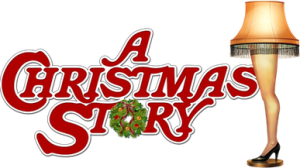 A Christmas Story is one of those underappreciated movies that has (somehow) been missed by a large chunk of the population, which is a shame because if you asked me to name my favourite festive movie, this is generally my go-to answer.

A Christmas Story is much better than the generic and uninspired title would have you believe. It’s set just after the Second World War and follows young Ralphie as he dreams and schemes his way through the plot in his pursuit of the ultimate Christmas present – an official Red Ryder, carbine action, two-hundred shot range model air rifle. The movie is blessed with great narration throughout, and along the way there are bullies, playground pranks, fudge, and perhaps the greatest lamp ever committed to plastic.

Ralphie: Ohhhh fuuudge!
Ralphie as Adult: [narrating] Only I didn’t say “Fudge.” I said the word, the big one, the queen-mother of dirty words, the “F-dash-dash-dash” word!
Mr. Parker: What did you say?
Ralphie: Uh, um…
Mr. Parker: That’s… what I thought you said. Get in the car. Go on!
Ralphie as Adult: [narrating] It was all over – I was dead. What would it be? The guillotine? Hanging? The chair? The rack? The Chinese water torture? Hmmph. Mere child’s play compared to what surely awaited me.

It is this period setting which sets A Christmas Story apart from most other seasonal movies. The movie is funny, touching, and (in one scene) ever so casually racist in a way that only movies made in the eighties seem to be able to get away with. Find it and watch it if you haven’t seen it, and stick it on again if you have.