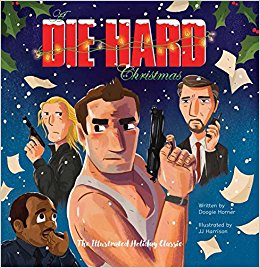 Now I don’t make a habit of reading illustrated storybooks, much less receiving them as Christmas gifts, but this year in my festive stocking, I found this little marvel from my sister – something that I didn’t even know existed. Having read it and seen the presentation I’m surprised it took so long to turn this genius idea into a reality.

A Die Hard Christmas is based upon the greatest movie ever made* boiled down to thirty pages of rhyming couplets, complete with gorgeous illustrations throughout. There are some instantly memorable visuals that really (somewhat surprisingly) capture the action classic, and the story itself (even more surprisingly) actually works quite well in this condensed form.

Of course, it goes without saying that despite the surface appearance, A Die Hard Christmas is not for children. The visuals are filled with blood, and there’s a choice expletive to end the story, so please don’t mistake this for something written by Julia Donaldson.

I only wish I had thought of the idea first.

* This is not up for debate.