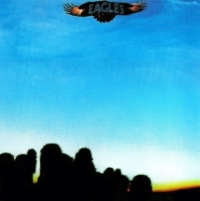 The Eagles’ debut album sees the band at their most stripped back – before ego and indulgence, although both would come before they ended their run.

Every member is allowed to shine vocally here, with each of them holding the mic for at least one track – a feather which is certainly atypical for many other bands, and a risky move that shows their desire to present the ensemble as equals.

The division of labour would certainly shift as the band progressed, but here at the beginning, the Eagles were just four young guys sharing the workload.

Take it Easy (Glenn Frey / Jackson Browne)
Lead – Frey
This is the first track on their first album, and some will say that they hit the ground running with this and never really improved. It’s hard to hate on it because it’s such a feelgood tune… and I’m not going to try. I wouldn’t go so far as to claim it’s the greatest thing they ever did, but it’s certainly a top tier Eagles song, and deserves its place in any collection of favourites. 8

Witchy Woman (Don Henley / Bernie Leadon)
Lead – Henley
Henley’s raspy plea struggles to fit in with the rest of this album because it’s a world away from anything else around it. This song feels like it’s split from the same seed as One of These Nights, and it would have fit nicely on that album, but its inclusion here is a sign of where the Eagles would head musically over the next few years. A great song. 9

Chug All Night (Glenn Frey)
Lead – Frey
This is a little known track, but a solid early rocker, at a time when the Eagles were primarily producing softer, easy-going songs. Frey wouldn’t have been my first choice to sing this kind of track, but then he did write it. He is (mostly) comfortable on the microphone, but it is evident that he’s learning how to perform the harder stuff. 6

Most of Us Are Sad (Glenn Frey)
Lead – Meisner
It’s hard not to feel reflective when listening to this one. It’s the kind of sombre song that encourages you to take out your lighter at a concert… or go buy one if you’re not a smoker. This is the weakest of Meisner’s vocal contributions to the album. 5

Nightingale (Jackson Browne)
Lead – Henley
An inoffensive up-tempo Henley number that I imagine would sound great in the car with the top down. There’s nothing particularly wrong with it – and I usually give Don a little more rope than I would others – but it’s probably about a minute longer than it needs to be. 5

Train Leaves Here This Morning (Bernie Leadon / Gene Clark)
Lead – Leadon
Six songs in and all four Eagles have been given a shot in the spotlight. This simple and mellow campfire-ballad fits Leadon’s lower register well, and is the better of his two efforts here. 6

Take the Devil (Randy Meisner)
Lead – Meisner
A good Meisner number that shows a different side to his vocal style. It has an excellent guitar sound, and is musically reminiscent of their follow-up album, Desperado. 6

Earlybird (Bernie Leadon / Randy Meisner)
Lead – Leadon
The weakest song on the album. It starts with irritating bird chatter and segues into some banjo music… so right away it’s a hard sell. Thankfully it’s very short, so it doesn’t leave too much of a stain. 4

Peaceful Easy Feeling (Jack Tempchin)
Lead – Frey
Along with Take it Easy, this is widely considered to be the second classic from their debut album. Frey did not have the strongest voice in the band, but he had a knack for presenting these mid-tempo tracks believably that would have left every other Eagle floundering. 7

Tryin’ (Randy Meisner)
Lead – Meisner
I should go on record as saying that Meisner was the most underrated Eagle. His voice soars on this final upbeat track, and it’s a fine way to end the album. 7

Overall: 63%
That feels a little low, but the numbers don’t lie. Debut albums are often a case of a band finding their musical feet, and that’s what’s happening here. There are some bright spots along with a couple of forgettable tracks, and their sound is helped immeasurably by the fact that they use all four members of the band behind the mic. It’s notable too that at this early stage, Henley’s only credit is a co-writing gig for Witchy Woman.