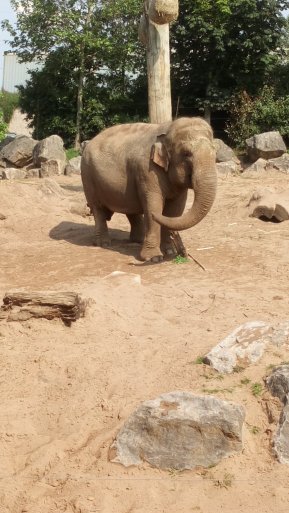 Right away I felt that the layout of Chester Zoo was better than that of Alton Towers. The routes were marked out and signposted in a simple to read fashion, and the map wasn’t just a confused mess of pictures. Sure, it’s a zoo, so we’re maybe talking apples and oranges, but still…

We saw a lot of animals today, from the obvious attractions such as elephants and giraffes to the less common sights like a Tree Kangaroo and painted dogs. There were several talks and lots of information points (as you would expect, really) so there was no shortage of knowledge for those with a thirst for it.

Elephants are The Girlfriend’s© favourite animal so we spent a lot of time with them. Chester Zoo only has Asian Elephants as they are more endangered than their African cousins.

We managed to get very close to the giraffes which was fun because they are often creatures you only get to see from a distance.

There were a number of walk-through areas – butterflies, orang-utans, bats – where the temperature was turned up to the max to accommodate the residents. The bats were especially good because the room was pitch black and they were just flying around at their leisure, because we were in their space. I enjoyed it but I think The Girlfriend© would rather have ridden Oblivion at Alton Towers.

There was a ten minute lazy boat ride around several of the enclosures. There wasn’t much to see during the journey, but it was a nice change of pace and a chance to sit down.

The big cats were disappointing – the lions were asleep on the grass, the Sumatran Tiger was barely visible in the reeds, and we never did catch sight of either the jaguar or the cheetah. But I understand that is simply the nature of a zoo – five minutes either side may have been an entirely different experience – so I won’t fault them for that.

I enjoyed the chimpanzees and the rhinos, and of course who doesn’t smile at the meerkat?

There were also animatronic dinosaurs on show as part of a three month focus on prehistoric predators which was good to see as I have fond memories of my dinosaur love from my childhood.

All in all, a very good day. I have not been to many zoos, but this is up there as highly recommended. I appreciate that zoos can be quite a combative topic as some people feel the animals should be out in the wild, running free. And I happen to agree: they should be. But until we stop killing them for sport or decoration, zoos are helping to preserve these creatures for as long as possible.