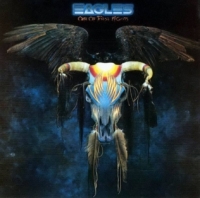 One of These Nights inarguably marks a change in sound for the Eagles, and – following their first three heavily country influenced releases – it would begin a trilogy of more rock-oriented albums.

Don Felder may not have been the man who made that happen, but his guitar was certainly a great influence on their music. Bernie Leadon is lost in this line-up, and his departure after this album – while sad – almost feels like the shackles have been loosened for a band that were moving in a different direction by now.

One of These Nights (Don Henley / Glenn Frey)
Lead – Henley
A bona-fide Eagles classic with super harmonies and a great guitar sound throughout. It’s like they introduced disco to rock and discovered this song in the process. 9

Too Many Hands (Randy Meisner / Don Felder)
Lead – Meisner
Meisner may be the one singing here, but this song has Felder’s fingerprints and fretboard all over it. It starts off strong but loses it a little towards the end. 7

Hollywood Waltz (Don Henley / Glenn Frey / Bernie Leadon / Tom Leadon)
Lead – Henley
A very deliberate and sombre song. I like it, but there isn’t enough here for me to latch onto. Henley is competent on vocals, but I get the feeling he is sleepwalking through this one. 6

Journey of the Sorcerer (Bernie Leadon)
instrumental
The Eagles didn’t release many instrumental tracks during their run, and this is both the longest and the best one they ever did. Oddly, this may be the high point of Leadon’s tenure with the band, but it’s a track that would have fit better a couple of albums ago. 7

Lyin’ Eyes (Don Henley / Glenn Frey)
Lead – Frey
A mellow Eagles classic which stays in second gear all the way through, but it tells a good and relatable story. It’s a simple lyric, and you may think it goes on a verse too long, but it’s hard to fault the sincerity of it. 7

Take it to the Limit (Don Henley / Glenn Frey / Randy Meisner)
Lead – Meisner
This song may not be the best one Meisner performed with the Eagles, but it is the greatest single contribution that he made to the legacy of the band. 8

Visions (Don Henley / Don Felder)
Lead – Felder
The only Felder lead vocal is a good one. His weakness as a singer is masked by the music and the rest of the boys accompanying him. 7

After the Thrill is Gone (Don Henley / Glenn Frey)
Lead – Frey & Henley
This is a solid (but far from inspired) shared vocal, and one of their less celebrated collaborations, with Frey finding his home on the verses and Henley taking on the more emotional bridge work. 7

I Wish You Peace (Bernie Leadon / Patti Davis)
Lead – Leadon
The final Leadon vocal, and it feels like the rest of the guys were throwing him a bone here. It’s not bad, but this is a track for a different album. 6

Overall: 71%
There may be a few Eagles standards here, but One of These Nights is the only genuinely great song on the album. Fortunately, the other tracks are pretty good across the board, putting this right up there with Desperado on the scorecard.