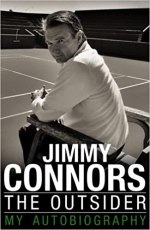 I recently finished reading Jimmy Connors’ autobiography, The Outsider, published in 2013. It was a great insight into a fiery and fascinating character – truly one of the biggest names in tennis in the seventies and eighties.

I started watching the sport when his career was winding down, but I still caught a lot of his matches before he hung up the sneakers for good. Even as a kid who had never picked up a racket at that time, I understood his passion for the game and I admired his full-throated desire to win at all costs. Like him or not, he really was an inspirational player.

True to his image Connors had a lot to say about a lot of people – from his ill-fated relationship with Chris Evert, to his respect for Bjorn Borg. Apart from some light-hearted jabs there was little vitriol – even for John McEnroe, a player he famously butted heads with constantly throughout their professional playing careers. There is also a heartfelt chapter towards the end about his friend and fellow player Vitas Gerulaitis, who tragically died at the too-young age of forty.

Even now, Connors has much love for the game, but what really comes across in his words is how close he was to both his mother and grandmother, both of whom had passed on when this biography was written.

I don’t read many biographies, but this is well-worth a read if you enjoy the sport, and if you appreciate the insight of someone who was at the top of the mountain for longer than most.