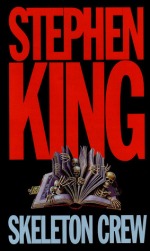 The Jaunt is Stephen King with his sci-fi hat on, a genre which he dabbled in a lot more back in the first half of his career than he has done since, which is fine by me as even the hint of that stuff sometimes makes me groan.

The Jaunt is set hundreds of years in the future, in a world where teleporatation – or jaunting – is a thing. The story has echoes of The Fly in a mad-scientist-in-a-lab kind of way, but ultimately it swerves in a different (but still memorable) direction.

We are six stories in to this anthology and King is yet to deliver something below par. The sci-fi here is limited, and with a family at its core it feels more grounded as well… which helps me get over the potential hurdle that the genre often throws in front of me.