So my new localised (albeit, crudely put together) version of Monopoly, and my (rather oversized) Ticket to Ride – Scotland map, have both been completed and tested. They have taken a lot of my recent furlough time, but the good thing is that they both work, and they are both enjoyable in the same way that the base games are.

I made several changes to the basic rule set of Monopoly, including writing a complete set of new Community Chest and Chance cards, and adding a couple of casino spaces to the board, along with their own set of cards. These changes were a concerted effort to shorten the length of the game whie also injecting a little freshness into the mix. While these changes didn’t seem to have much effect on the duration, the consensus was that they did make the game more involved and interesting. 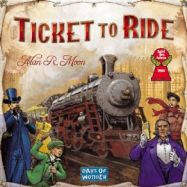 Ticket to Ride – Scotland was a much more school project kind of creation, because I didn’t have a base game to begin with, just the basic rule set, which is a little different for each version released. I bought some foam boards, used Lego for the tracks (and the playing pieces), and developed 72 routes – which is more than most other iterations of the game. I also had to make my own colour-coded train cards (over 100 of those) which anyone who has played the game will be familiar with.

In fact, I was so impressed with my effort that I sent off an email to the guys who produce the Ticket to Ride franchise, hoping for a little feedback!