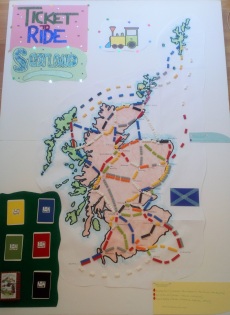 So, a couple of days ago, my email to the producers of Ticket to Ride resulted in a response, asking me to send along a link so that they can add details to their fan page.

I checked it out, and it seems there are many other players who have had similar ideas – although (crucially) there are no maps there for Scotland, and very few of the ones listed are available in a physical form. As good as a lot of them seem to be, most of them appear to have been built on a laptop.

Well my iteration is certainly physical. At 33 inches by 47 inches, the game board is probably a little too big to be considered mobile, but secured and backed by some lengths of 2×4 it is very stable and will easily stand in the corner of a room or garage when not in use. And because it has been built on foam card, it is extremely light as well, so there is that.

I used a lot of primary school effects such as glitter, colouring pencils, and gold stars (the kind your teacher used to stick on the wall if you were good, or – in my case – used to scratch off if you had been naughty). I even bought a couple of sets of Scottish playing cards so that I could use the design as the backing for the train colours that I required… it’s all about the little details.

The game has been played half a dozen times, and while everyone else in the house has claimed victory at least once, I have yet to win a game, so that is a bit annoying. Of course, none of this will make any sense to you if you have never played the game, but thanks for indulging me.