To coincide with the release this week of my horror novella Replay, fellow Australian author and sometime artist, Greg Chapman (who Dark Prints published last year via their novella series) shouted a few questions to me from the other side of the pond.

Hopefully, when he reads the story, he won’t want to pull the interview down!

You can pick up Greg’s effort, Vaudeville, for the special April-only price of 99 Australian cents. 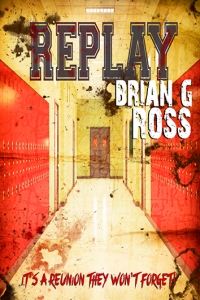 I am pleased to say that my horror novella debut, Replay, will be released electronically by Dark Prints Press on April 15th, for the low-low price of $3.99 Australian (other currencies are available) either as an instant download from the main site, or via e-retailers such as Amazon, Bookworld, and Kobo. Replay is an unapologetic, old-school horror tale about a reunion that should never have been. Fate may be late to the party, but she is always on her way…

I am particularly impressed by the thirty-second promotional video that editor, Craig Bezant, put together for the release:

Dark Prints is an Australian outfit I have been involved with several times over the last few years. I had short fiction in the first four issues of the now sadly defunct ezine Eclecticism; and was also featured in The One That Got Away, a dark crime paperback anthology, released in 2012, so I am very pleased to be extending the relationship further with this release.

Despite everything – and somewhat ironically – writing-wise, 2012 was a good year for me. I completed an overhaul of my Deep South drama novella, The Ballad of Martha Brody; I finished the revision of my horror novelette, Replay (which is to be published early this year by Dark Prints Press); and in the dying moments of the year I even managed to close the door on the redraft of Bleeding Outside the Lines – possibly my most ambitious short horror story to date.

And that novel is edging ever closer to the finish line too… So yeah, all things considered, not too bad. Fingers crossed for 2013.

Happy New Year, folks! I hope all your dreams come true – even the silly ones that only you believe – and those resolutions to stop smoking, lose weight, get fitter, and be nicer, go unbroken.

Dark Prints Press has announced – via their blog – that my horror novella, Replay, is to be published in February 2013 as a standalone e-book. It will join the current line-up, alongside fellow Aussies, Martin Livings and Greg Chapman.

It’s my biggest publication to date, and I’m very happy that it’s good, old-fashioned horror as well. No apologies. No punches pulled. No monsters as such but, you know, still scary stuff.

When I started this game many years ago I always thought – given the type of stuff I was reading – that I would be a horror writer, but it hasn’t really turned out that way. It’s probably for the best though – I’d hate to be pigeon-holed as such, and be thought of as a one-trick pony. Still, it’s nice to go back to ‘my roots’ and deliver something to the genre that I’m proud to have written.

I’m looking forward to seeing the cover that Dark Prints Press produces, and when I know… you’ll know.

I am a Scotland based Australian with over 100 publications - humour (Defenestration) to horror (Murky Depths), mystery (FMAM) to mainstream (Underground Voices), and everything in between. My work also appears in several paperback anthologies, including Read by Dawn (Volume 1, 2, 3), The One That Got Away, and Damnation & Dames.
My Tweets