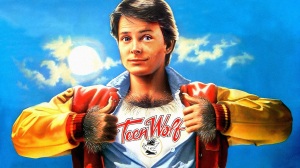 I’ve always been a fan of Michael J Fox, but even I can admit and accept that Teenwolf is not one of the greatest movies on his resume – hell, it wasn’t even the best thing he put out in 1985. It’s fun, and as entertainment Teenwolf is certainly harmless enough, but it gets by on its central performances rather than the tightness of its script and plot. 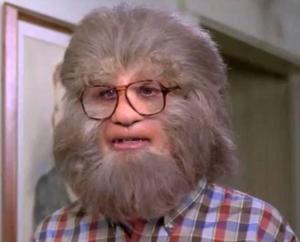 Fox plays Scott Howard, a teenager who finds himself showing signs of lycanthropy, while going through the usual issues that any other hormonal high school kid has to endure. James Hampton plays Scott’s father, in perhaps the cutest and least intimidating interpretation of a werewolf in the history of cinema.

The story – if you try to forget about the whole wolf thing – is fairly standard eighties comedy fare, but there’s nothing wrong with that. A lot of my favourite feelgood movie moments were produced in that decade. Teenage boy has a crush on (blonde) teenage girl, but he is oblivious to the fact that other (brunette) teenage girl likes him. Spoilers: by the end of the movie, teenage boy swaps his desire for light to dark.

It’s hard to believe that back then, they got away with dialogue like this. These days, there would be an entire internet noticeboard devoted to shutting the movie down and firing everyone on staff, but in the eighties people were a little less serious about things like that.

There’s a school basketball story wrapped up in there as well, and a great supporting performance from Scott’s best friend, Stiles, but try not to take this too seriously and you’ll probably enjoy it for what it is.

I am a Scotland based Australian with over 100 publications - humour (Defenestration) to horror (Murky Depths), mystery (FMAM) to mainstream (Underground Voices), and everything in between. My work also appears in several paperback anthologies, including Read by Dawn (Volume 1, 2, 3), The One That Got Away, and Damnation & Dames.
Join 189 other followers
My Tweets
Loading Comments...