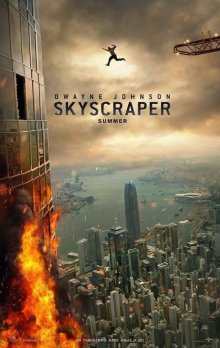 What’s it all about?
The Rock is Will, an FBI operative who loses his leg below the knee and has a prosthetic attachment for the remainder of the movie. A decade later and he is a security consultant for the world’s taest skyscraper, which is in Hong Kong.

A group of terrorists break in to the building and start a fire in order to take control of the situation, but as luck would have it, Will’s children are now stranded and it is up to him to save the day and take down the bad guys…

…which he does about an hour later courtesy of a lot of not-so-special effects, some awful stunt work, and one particularly ludicrous moment where my suspension of disbelief was taken beyond breaking point. Yes, you can see it in that poster.

Watching it with the kids…
Yeah, go on. This is family friendly entertainment… although I use that term loosely.

Verdict…
I went in to this one with high hopes. The Rock is a very charismatic performer, so at least it has him going for it, right? Well… no. This is very much in the mould of Die Hard, although I feel dirty even making that comparison because Skyscraper has none of the action, stunts, heart, soul, humour, or pathos of that classic. It’s a one-legged imitation.

It pains me to say so, but this is a poor Dwayne Johnson movie, and one I will never go back to.

This one goes to one of my young work colleagues… one who should probably remain nameless after this little inquiry. So let’s just call him Kieran.

“Don’t you think Dwayne Johnson and The Rock look like the same person?”, he asked.

I asked Kieran if he was serious, at which point he questioned whether or not he was thinking of the right… people.

Now, in his defence it would appear that he is not the only one who doesn’t know that The Rock and Dwayne Johnson do indeed share a passport, but I figured that someone in their early twenties would have their finger a little more directly on the pop culture pulse than he apparently does.

I wonder if he knows that J Lo is really just Jennifer Lopez.

I am a Scotland based Australian with over 100 publications - humour (Defenestration) to horror (Murky Depths), mystery (FMAM) to mainstream (Underground Voices), and everything in between. My work also appears in several paperback anthologies, including Read by Dawn (Volume 1, 2, 3), The One That Got Away, and Damnation & Dames.
Join 189 other subscribers
My Tweets
Loading Comments...